Gene Steiner is the author of 7 books and has served as master editor for 19 others. But that is just the beginning of his qualifications to do multiple roles in the production of Abducted to Kill, the movie.

Gene Steiner was born in Cleveland, Ohio, to wonderful, loving Mennonite Christian parents.  He graduated from high school in Warsaw, Indiana. While living there, he observed Christian films being produced by Ken Anderson Films of Warsaw. There Gene met Dan Dunkelberger, film director and cinematographer. Steiner boldly encouraged Dunkelberger to accept a position to teach cinematography at Oral Roberts University, which Mr. Dunkelberger did -- and that is how Steiner,  while attending ORU, was  mentored in this field.
-
Dr. Gene Steiner's many accomplishments and answers to questions about Abducted to Kill, the movie are listed below.

------
Q. What makes ATK different from other projects you have worked on?

Gene: "Abducted to Kill" will be a faith-based movie shot on location and a dream come true for me to assist in the production of a major movie since I have been producing Christian media productions in other formats up until now.

Gene:  It is a fulfillment of my original call to help produce Christian films.

Gene:  I expect there will be a series of 5 or more successful motion pictures having a global impact.

Gene:  The world must hear the Gospel. Films are an excellent means to communicate this message to reach this generation. My role as a prayer intercessor and chaplain for this project will provide a prayer covering, and spiritual staff support, and will be a fulfillment of part of God's call upon my life.
--------------------------
For Dr. Gene Steiner, his career life is just beginning. His many accomplishments include:

Media director and producer/director for many ministries producing over 5000 Christian television programs for:

In 2014, at Jesus Calls International, Gene produced 26 programs plus many hours of raw HD video. He also designed and installed a state-of-the-art high definition television studio with robotic cameras - plus multiple robotic camera production capabilities in the sanctuary and a flypack for this Dallas ministry.
-
He traveled to India for three weeks in 2014 consulting with Jesus Calls International. There he helped design an outside broadcast van, trained television production crews, lectured at Karunya University to 400 media students, served as lighting director for a prayer festival in Kurnool, India (with 200,000 people in attendance); lighted the Chennai DGS Dhinakaran Prayer Tower auditorium, designed ENG production gear packages, and consulted with key ministry executives for MAM upgrades. 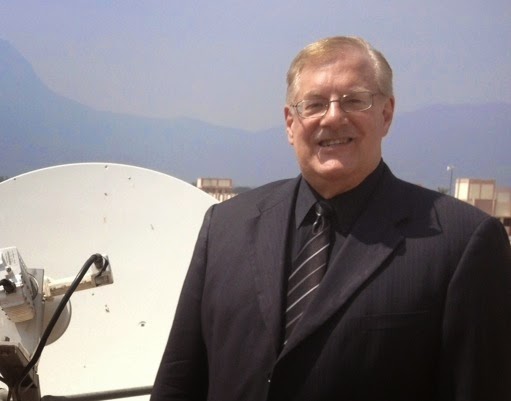 Director for an ad agency that syndicated daily TV and radio programs to 4,500 TV stations, 5 TV networks, and 125 radio stations.

Media consultant, sales manager, and system designer for the past 7 years.
Posted by Pola Muzyka at 12:42