Mike Gorga has been in the film and video business for 35 years. He began his career as a camera person at a PBS affiliate in Northeastern Pennsylvania. In 1983 Mike met Thomas "Pepper" Martin, a newspaper publisher who helped launch MEGCOMM Productions, a production company and studio facility designed to produce corporate/industrial films and television local/regional television commercials.  For 30 years MEGCOMM has delivered high-end film, video and now high-definition production and post-production/editing to the corporate, non-profit and television commercial advertising market.

From sales and marketing videos, to training and orientation programs, to mini-documentaries, to infomercials and television commercials Mike has worn many hats including producer/director, writer, director of photography and editor.  He has produced hundreds of corporate projects and perhaps a thousand television commercials, including over 300 for one healthcare system.

When asked about his connection to the film Abducted to Kill, Gorga had this to say:

Q. What makes ATK different from other projects you have worked on?

Mike: For me ATK represents an opportunity to work on a dramatic film in collaboration with deeply passionate and committed Christians.  The depth of my career has been in corporate and industrial films, fundraising for non-profits, television commercials and some documentary style work, but this film gives me the opportunity to edit a theatrical film that I really believe in and that will deliver a Christian film that is rather unique. 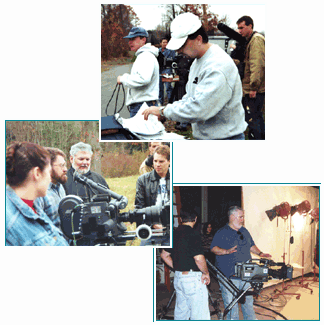 Mike:  The story. The opportunity. And a chance to work on an important film with a close friend of 30 years who happens to be the storyteller and producer.

Mike:  Ultimately I see Higher Ground Films following the path cut by Sherwood Pictures.  A company that turns out one great film after another.  A company committed to telling great stories and driven by a desire to spread God's word through the blessings He has given us as writers, producers, directors, editors and scores of talented crafts people.

In the short term I am excited to hear about the progress of those working to acquire funding for "Abducted To Kill," a film I am blessed to have been offered an opportunity to edit the rough cut on the major production and to have edited promotional material for the film.


Mike:  Frankly, because I think God is the only hope for America and the world.  I'm not happy with where sin has taken us. Driving God out of our institutions has caused most of our challenges, I'd like to be a part of helping deliver God's message back to Americans and the world using the talents He has blessed me with.